Already one month studying intensive Chinese in Tainan has come and gone.

As expected, it is all happening so, so quickly. Before I know it, we will be saying our goodbyes and heading home to our respective lives—eek, what is grad school. I think the main reason I would want to stay longer here is simply because I feel much more comfortable not only in Tainan, but in Asia in general, to strike up conversations with strangers, with the potential to make new friends.

Because of this week’s language task that required us to ask local Taiwanese people about their ideas on what defines a family (“LOVE IS ALL YOU NEED!”), I felt compelled to take this task to the next level. (Having a journalism background also helped). True, I waited until an hour before the assignment was due to ask my first two out of three people, but then the third one, plus a bonus fourth, were from the employees of a local coffeeshop that I had very quickly come to appreciate. My teacher was nice 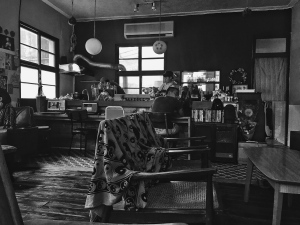 enough to accept my excuse that the coffeeshop doesn’t open until 9 a.m.—frankly I also just didn’t think about completing the task until the last minute—so I wasn’t able to ask the barista I had my eye on for class that day, but that afternoon, I returned with a lot of apprehension for the task at hand (what if they weren’t as friendly as I had thought?) but in the end I am so glad I went. We chatted for a while, with my asking in American-accented Chinese what she thought a family should have and if the single life is a good or bad thing. She, turning 28 this year, asked her boss, who turned out to be nearly 40 years old but does not look a day over 30. #asiangenes

The conversation took many turns, and I realized that my asking if Tainan felt boring to them revealed a bad influence from my peers who had long ago determined this city was “too boring.” In fact, I now see that I would have to agree with these employees, who said that they found life in Tainan to be comfortably slow, especially compared to the big city of Taipei. The more I think about it, just because we do spend most of our days on campus, when I do venture off to various parts of the small but ever-so-interesting city, I find myself having a great time. Senses of newness, unfamiliarity, and convenience all have something to do with my comfortable happiness, and that can be said for just about any Asian country, but Tainan sure still has its unique characteristics. All this is to say that it is simply nice to hear from locals who do see the best parts of Tainan, which helped myself appreciate the city more.

While I did not get pictures of me with them, I know I will be revisiting the shop often.

Now this past weekend, I had originally planned on spending it exploring the museums nearby. After not being able to sleep in on Saturday morning, I decided to pack my books into my backpack and head out for breakfast before biking or otherwise making my way to the National Museum of Taiwan History. Of course, as I walked out of my room, distracted by my listening to podcasts, I forgot my keys, locking myself out, and with my roommate gone for the weekend and no one downstairs to help me out so early on a weekend, I was stuck.

At the same time, however, our resident director was getting ready to take a small group of three students to the Guanziling Hot Springs for a Saturday day trip. Obviously since the weather has been so insufferably hot and humid, I hadn’t planned on going at all, but given my situation, I decided on a whim to join them. And wow, what luck.

We took the train then taxi with the a few other people from the Critical Language Scholarship program that’s also studying at this university this summer. It was nice to finally meet some other people from CLS, since we always pass by each other in the halls and study in the same classrooms during breaks.

The place we went to wasn’t the actual Guanziling Hot Springs, but rather a random hotel not listed on Google Maps that offers what is exactly like the baths you find in Japan and Korea—both cold and hot baths, along with sauna and steam rooms. I felt oh, so relaxed and truly enjoyed myself. I kept thinking maybe my subconscious really did want to go to the hot springs and somehow let me forget my keys so that I could go on this day trip. After enjoying the spa and lunch at a nearby restaurant, we took a walk along windy paths on the mountains to appreciate the gorgeous natural scenery—before it started pouring. We got back into the taxi to the train station literally seconds before the clouds that had been looming over us the entire time we were walking on the mountain roads finally opened up. 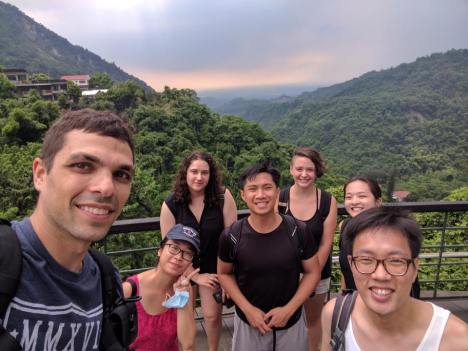 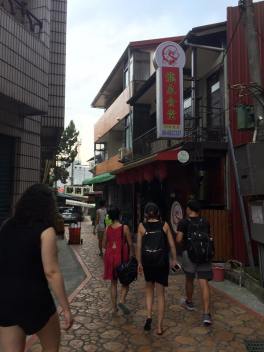 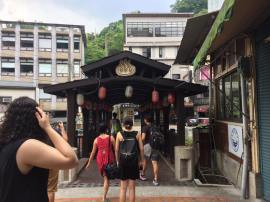 The rest of this week comprised more solo adventures, including biking to a super cool local cinema that boasts hand-painted movie posters. Based on the website, I had originally thought the movie showing at 7:50 p.m. was Ghost in the Shell (2017), but turns out I was looking at the wrong theater from the same parent company, so I ended up watching Colossal (2016) starring Anne Hathaway. Again despite initially having no idea what movie I had actually chosen for 7:40 p.m., I thoroughly enjoyed the movie!

Biking through Tainan Park to dinner and then cinema. 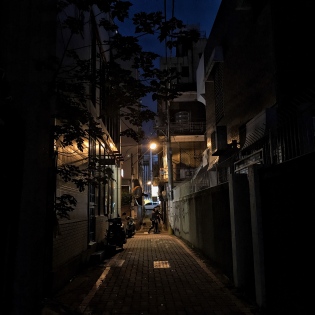 A very bleh panini sandwich before biking to the cinema.

For this week’s cultural class, we learned how to wrap spring rolls—which, lol, is as basic as you can get when it comes to teaching waiguoren how to “cook,” but you know. Free food. When in Asia. Etc. 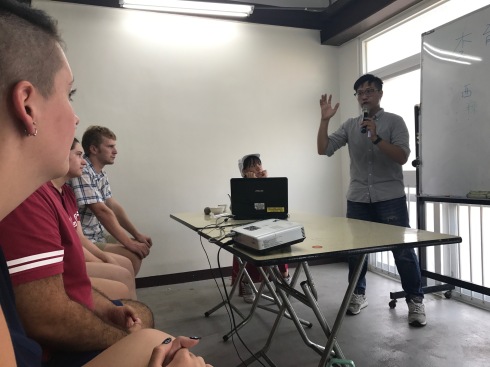 And then for the rest of glimpses into my fourth week in Tainan:

My language partner is too cute. 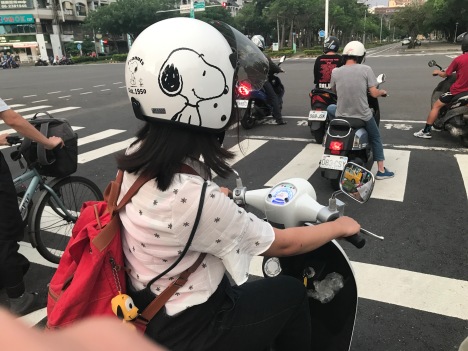 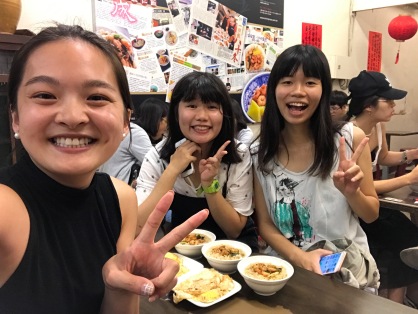 Dessert with the owner who kept telling me how pretty I was, LOL. 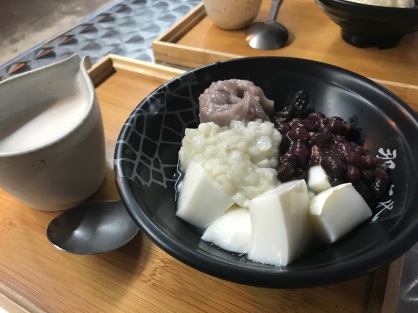 Almond juice and other dessert-y goodness. ❤

Wedding photos being taken on campus. 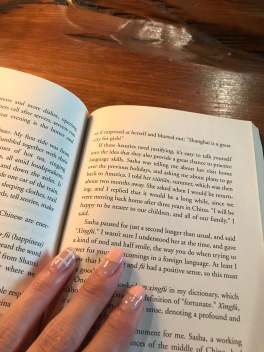 And one more long tangent before I go to sleep: Do not forget that this intensive program remains fraught with problems. As you could likely tell from my post earlier this week, my experiences have not all been so easy on me emotionally. Despite how it may seem from the outside looking in, trying to handle and deal with others’ incompetence, while testing your own strength and patience, is tough. As I’ve written before while in China, distractions can only distract you for so long, until a space opens up in your mind to allow for pain and vulnerability, whether from the current or past situations. Especially when the majority or society pushes you one way, and you feel just uncomfortable with that direction, it can be seriously testing to your sanity and sensitivity regarding everyday situations. I don’t want to become numb to society’s flaws or to what I know in my heart is wrong. But it is just so incredibly difficult to change tides.

ANYWAY, nevertheless, I remain excited for all that’s left to come in this program!