While going through this past week’s photos and notes, I had initially thought that it had been a rather calm week. Fewer photos. Fewer notes. More time spent on cramming for the HSK.

But then I realized that no matter how “calm” I may think a week may seem in comparison to some recent crazy ones, there will always be moments worthy of recording.

I think this speaks volumes—that what I thought was a calm week actually wasn’t all that calm, especially when I think back to my days in the U.S., especially during college breaks at home, when I would find myself sitting on the couch watching TV for hours, playing with my dog, taking pictures of my dog, maybe walking my dog (RIP), generally being lazy as hell.

This laziness isn’t possible in Guangzhou—as much as I may want the peace that comes with it.

In fact, I miss these less socially active weeks, because I feel I’ve been slacking on noting the minute details of life around me. Recently, I’ve focused more on the big picture, with a few details here and there. But when it comes to those unique portraits of my life and the lives of those around me, I haven’t been as diligent.

So allow me to ease my way back into it a bit.

1 — blk #2
In an effort to pack lightly before moving to China, I had left behind my signature red blk glass water bottle. Yes, for almost a year, I had no reusable water bottle, i.e., was an environmentally terrible citizen—though, arguably aren’t we all.

I’ve mentioned my love for W4 before. They’re all about offering a wide range of deals in Guangzhou through their platform on WeChat, and I keep a pretty close watch for anything I might like. Especially being in China and without Amazon Prime or guts to splurge on Taobao, I’ve been filling that shopping void with occasionally browsing W4 deals (lol, such an #ambassador. Don’t worry, I actually will start working for them soon, hehe). And this week, I ordered and received my second blk bottle, this one in a more classic bottle shape but with such a cute cover and brush to clean it! 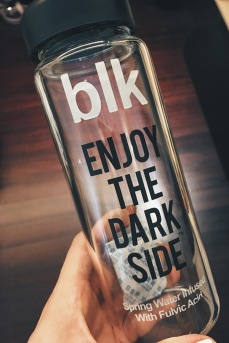 2 — Lead-Up to HSK
This past week felt like cramming for a college final all over again. I rushed to and from classes, took as many practice tests as possible, and worried a whole lot about nothing.

3 — 汉语水平考试
These past two months have been marked by a refreshing jolt of productive passion, and I’m so happy to have managed going from not even being able to take the HSK 5 practice tests just a couple weeks ago to thinking I at least passed 😛

My thoughts: As another blogger put it years ago, the listening part is still crazy easy, making me wonder what the listening for HSK 6 and even HSK 1 is like…

And the HSK 5 isn’t much harder.

“Oh, no! My flight from Beijing to Shanghai is canceled!” “Why?” “Because the weather is bad.” Where is the man going? A) Beijing. B) Shanghai. C) Hangzhou. D) Xiamen.

But I’m glad, because in comparison, the reading part—for my current level of preparation—is impossible to ace. For the longer reading passages, it was legit a toss-up. I found myself rushing to answer all the questions in time and pretty much guessing for at least half of them.

Fortunately, I think I also did pretty well on the last section: writing (typing, heh, because if I actually had to write, I would definitely fail).

I think all the prep had made me quite adept at bullshitting in Chinese, e.g., using five words (in bold) to write an 80-character essay: Little Ming thought that his job wasn’t meaningful so he quit. He then saw information for a very interesting job opening online. So he sent his résumé and applied. After interviewing, he didn’t feel that he had a lot of special experience and thought that his interview wasn’t that distinctive. He was very worried. So he didn’t expect that after a month he would receive a call from the company. He was very happy.

The second essay is even easier, simply based on a picture. Luck seemed to be on my side, as the picture I got was of a celebrity being interviewed, meaning I could use the characters I’ve learned from work about interviewing and reporting 🙂

In general, writing essays for such tests usually just means you have to bullshit some story to make it believable enough. Add a touch of warm-hearted, cliché life lessons, and you’re golden, e.g., In life, there are many different paths to take. But as long as one has the confidence, success will surely follow.

Anyway, one month to wait until results come back. Eeek. Hope the reading section wasn’t too terrible.

5 — W Hotel Episode Uploaded
Didn’t edit this one, so I couldn’t edit out some of my awkwardness, but if you’d like to watch it, I’ll share it with you on WeChat or Messenger. Otherwise, enjoy these screenshots 🙂

I like the intro of me walking in to the hotel with the general manager and enjoying a drink, i.e., taking a sip of the non-alcoholic beverage. The experience was definitely awesome—one of the best ones so far!

6 — #OnlyinChina
I have a love-hate relationship with this, but I know I’ll still miss it: The ridiculously fast-paced openings and closings of shops and restaurants. At least five new restaurants have opened downstairs of my apartment building all within these two weeks or so.

I love it, because convenient, new, yummy, cheap food choices.

I hate it, because construction, instability.

This week, I tried the newly renovated new (that extra new is no mistake, the place had opened for a couple months then shut down to renovate after no business, #withwhatmoney) Thai restaurant downstairs. Before the renovations, I never saw any customers. But now that the space has been divided into at least two different, reasonably sized restaurants, I noticed they were packed with people actually waiting outside with numbers and all. A new noodle shop downstairs was also packed on its opening day. Why? Because they gave out free noodles. LIKE, WHAT. Of course, I like to avoid those crowds, so I ended up trying the Thai place before the lunch rush this week. Food was average, but I liked the ambience and the staff greeting you in Thai. Sawadeekah! #authenticity

It isn’t a real update without another photo about pollution alerts, huh.

I just liked this because of the emoji. I also realized that the Plume app, in particular, pretty much says it’s high pollution every day, even if AQI is under 90, which I consider a good day. It seems that anything above 20 or so is “high,” according to this depressing app. Ironically, I like the Airpocalypse app better.

Yeah, after years of contemplating ombré, I got it done immediately after taking the HSK. They bleached the bottom first to make the ashy brown color pop more, and the top is a “chocolate brown.” I actually LOVE the chocolate brown and can’t wait until my darker brown roots start growing out. The bottom half turned out darker than expected, but it’s for the better, as it will eventually fade and get lighter 🙂

Can’t wait. I love it. As my hair stylist pointed out, can you believe a “big girl like me” waited this long to dye my hair?