Saturday started off drearily—rain and just a rough start. (Not as lucky as yesterday).

But a quick stop at Patisserie Valerie helped kickstart the day before heading into the fascinating Spitalfields Arts Market. Seriously, I had a blast. You can find some beautiful gems for amazing prices. I couldn’t help myself and got a pop-up greeting card, blue jacket for only 25 pounds (doesn’t keep you warm but was TOO fashionable and cheap to pass up. I wore it immediately. Photo of me in it later in this post 😉 ), and even a reversible black and red bag for traveling and carrying all my shit. It certainly lightened up my mood. 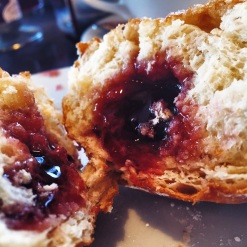 And as if Spitalfields was not exciting enough, we took the Tube to meet up with my friend’s friend at Borough Market, a foodie’s heaven! But beware, I caught a potential pickpocket unlocking my purse as I reached down to check it and saw the awful man. Luckily, I had caught him just in time, and he didn’t steal anything. In such a crowded place where walking from one place to another is itself a packed-like-sardines experience, after I stopped him, it was as if a gulf suddenly opened and separated us, with me glaring him down as I walked backward, half-jokingly telling my friend’s male friend to “beat him up.” He was still staring at my designer purse, as if he still had his eye on it—having pathetically failed and all. I remember raising my voice to say, “Ew.” LOL at the childishness but hey, he deserved at least that. 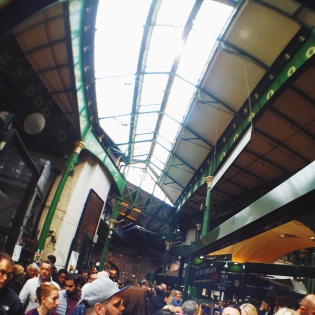 A glimpse at the Borough Market madness. 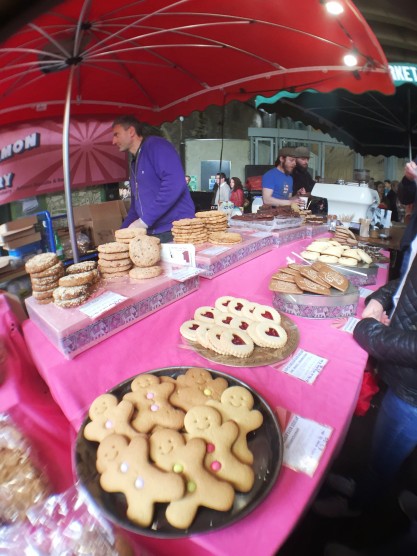 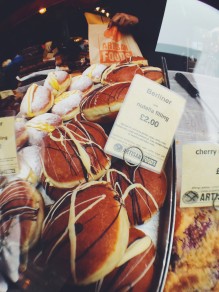 How jealous are you? Too bad I had so much self-control as to avoid these. 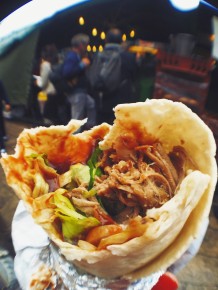 Why not take a photo while waiting in the long Monmouth line for lattes?

Cyclers powering a vehicle riding through the perimeter of Borough Market in London. 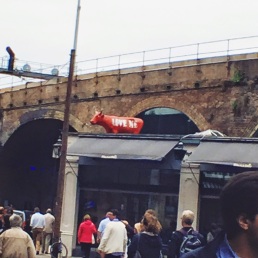 And then—more typical tourist adventure, from the telephone booth in front of the Big Ben to walking through Green Park to Buckingham Palace.

Typical shot in front of Big Ben out of telephone booth.

Cool architecture next to Green Park. 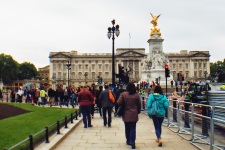 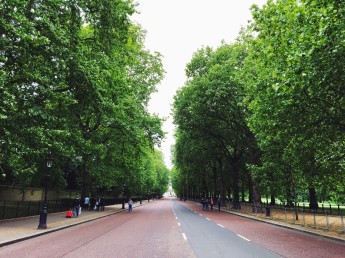 But one can only handle so much tourism. After some more walking, we headed back to Kennington to get ready for dinner with my friend’s friend (different one) and my own family friend. Unfortunately, because my friend’s friend was apparently “picky,” we went with his choice of Bill’s, a Western chain restaurant that my friend and I frankly weren’t impressed or satisfied with. Meal wasted. Should’ve gone with one of the many saved places on Foursquare as recommended by Anthony Bourdain.

Catching up with a family friend at Bill’s Restaurant (avoid, by the way).

And get this, my friend and I had planned to go to a gay bar called Heaven afterward—simply because I had never been to one and she had been to this one. We raved about our excitement at dinner, but of course, as soon as we made our way to the front door, we immediately turned around, with my friend remembering how she had male friends with her last time, making her feel at least a little bit safer. This was too much for us two girls. We headed home.

Now I was going to include Sunday in this post, but that deserves its own. Gotta head out for the day, so look for that exciting post when I return 😉