I feel that blogging for me becomes especially necessary on days like these, when I spend them mostly alone but experience awesome things that just need to be put out there, even if few people will see.

I Uber’d it to the Xconomy Forum: Tech Agenda 2014, which I got in for free ($40 for students, hundreds for other attendees) thanks to receiving a Stay in MA scholarship. On a side note, I tried taking the T, but fate had it so that I would just miss the last train for at least 10 minutes until I finally just gave in and called an Uber, despite all the recent drama with the company. I don’t regret doing so, not only because the wind chill was freezing my hands, but also because I ended up having another nice chat with my Uber driver, who happened to be from Morocco. I had been in another Uber recently where the driver was also from Morocco. The conversations I find myself having with Uber drivers are worth the extra cost. I learn a lot in the short amount of time I’m in these cars.

Anyway, back to the forum. I’m really glad I went and stayed until the end. I didn’t stay for the networking, wine, beer, and food after, but I should have, especially given all the editors and writers from Xconomy. But after such a long day and so much work looming ahead of me, I left immediately after the final and most interesting talk to head to a cozy café near Boston Common.

The main thing I took out of the event was reaffirmation of my decision to cover entrepreneurship as a journalist. As the director of the MIT Technology Transfer Office said, college students are increasingly turning away from the idea of working at large corporations, and instead asking themselves how they can make a difference either as an entrepreneur or at a startup. It really is an “epidemic” of entrepreneurship, and it feels so exciting to be a part of this industry.

I mean, who would have thought that Peter Thiel coming to speak and sign books at BU would sell out in less than 72 hours?! I continue to be amazed at how interested people really are in startups. As another panelist pointed out, as technology gets cheaper, the barriers to entry for entrepreneurs, especially young ones, get lower.

The event provided refreshments, including this cute gingerbread cookie that I just had to try and make a Snapchat story out of. 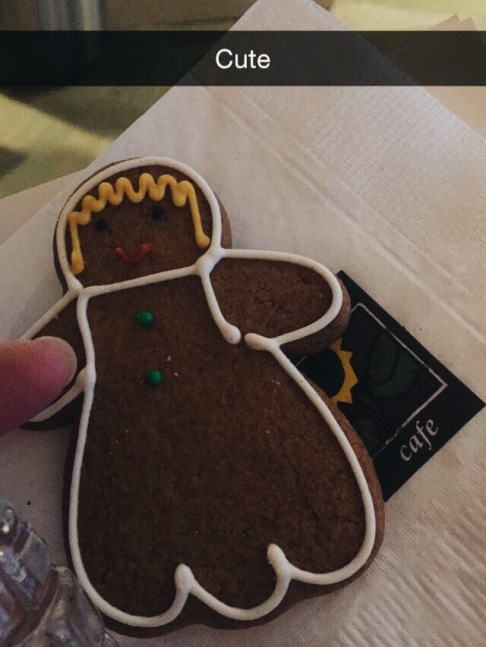 I tried to be funny.

While at the café after the event, I couldn’t help but have a surreal moment where I felt like I was in a movie, with my warm chai and facing the window to the first(?) snowfall in Boston. The snow and comfortable surroundings transfixed me. Productivity was nonexistent, despite my efforts. What I really should have done was sit back and relax, without my laptop or phone.

And of course, when I returned home, my roommate convinced me into going to get ramen with her. I HAD to feel somewhat productive after spending essentially the entire day not doing schoolwork, so we went after an hour of my practicing for my Chinese presentation tomorrow and doing my laundry.

But instead of ramen, we both decided to try the rice dishes—served in, might I add, what looked like dog bowls. I also realized that the sweet potato fries that we always get are served in a just-as-inappropriate container—one that looks eerily similar to those waste buckets (“night soil” buckets) that you still see in China.